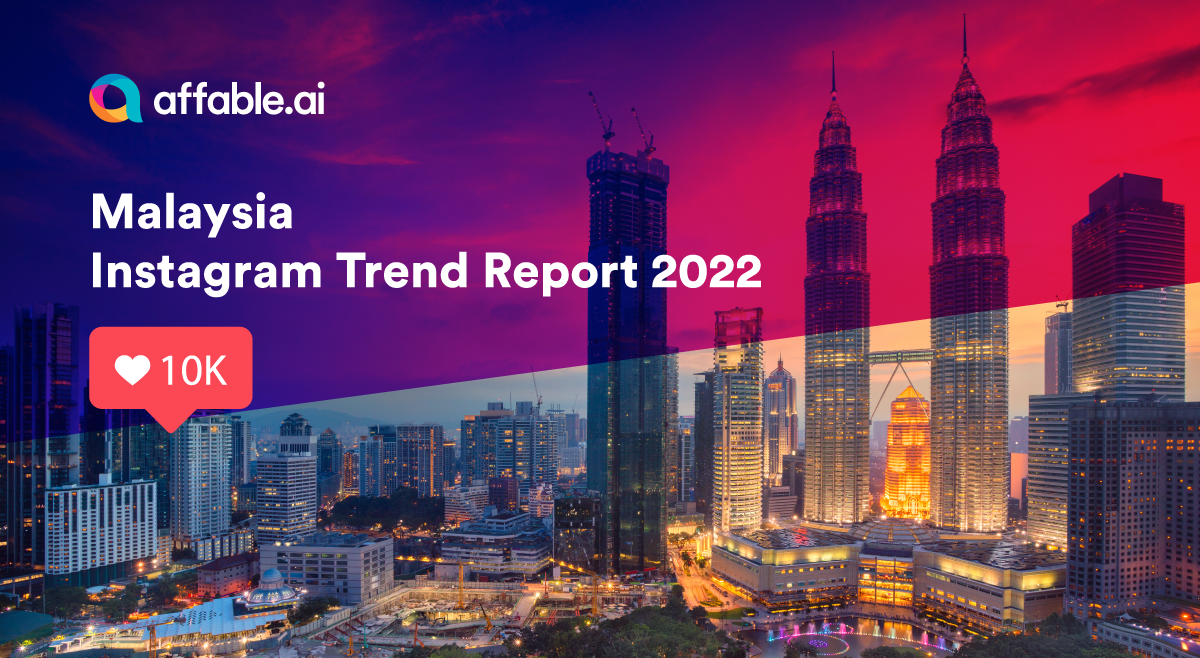 The influencer marketing industry in Malaysia witnessed an increasing demand for reliable content and budget-friendly influencers. The low engagement rate generated by celebrities in 2022 indicates that the audience relies on nano and micro-influencers for product recommendations.

‍affable.ai has gathered the data across Instagram influencers’ profiles to help you plan and analyze effective influencer marketing strategies and collaborations. This report will take you through metrics such as audience demographics, the number of influencers and engagement rates, and a curated list of the most engaging influencers in Malaysia.

A majority of Instagram users in Malaysia are females, accounting for 50.32% of the audience. Out of every 100 users, 50 are female and male users make up 49.27% of the user base. Among them, Gen Zs aged 19-25 years use the platform frequently, followed by Millennials aged 26-32 years comprising 32.79% of the active audience. The percentage declines further as the age increases, suggesting the younger generation primarily uses Instagram.

Nano-influencers have the highest engagement rate (4.43%) among other influencers. Unlike micro and mega influencers, nano influencers share a close rapport with their followers, enabling them to drive higher engagements.

Micro-influencers with 10k-50k followers created a 3.10% engagement rate. In the case of mid-tier (50k-100k) and macro influencers (100k-250k), the rate ranges between 2.40% and 2.21%.  Celebrity influencers in Malaysia generated the lowest engagement rate in the entire APAC region.

Overall, Instagram influencer marketing has recorded a 4.11% engagement rate in the country.

William Seng, a popular content creator, is best known by his @williamsengg TikTok account. He typically posts short daily lifestyle vlogs and videos of himself cooking different cuisines. His account has an estimated reach of 36.80K and estimated impressions of 55.20K. He produced about 37% of branded content, including promotions for Uniqlo Malaysia, Sony, Shopee, Amazfit, Toyota, Clef Skincare, Domino’s Pizza, Netflix, Vivo, and Casetify. With a high engagement rate of 37.07%, he attracts the most followers from the United States, India, Indonesia, Malaysia, and Brazil.

Aintasnim Marsya posts content on lifestyle, fashion and accessories, and beauty. She is mainly followed by females comprising 74.19% of the audience base. Marsya’s content attracts audiences from Malaysia, Singapore, and Brunei. Her estimated reach is 15.15K and her estimated impressions are 22.73K, with an engagement rate of 24.86%. The content posted by Marsya is 18% branded from the last three months, including product recommendations from Hijabistahub, Handbag Murah by Hollaxxstore, and Kebaya Sulam & Pario Specialist.

Ikhwan Ariff’s content is mostly based on lifestyle and education. His audience base  comprises 62.6% females and 37.4% males. Most of his followers are from Malaysia, Indonesia, and the Philippines. His engagement rate is 46.35%. There has been a drastic decrease in followers since October 2021. Fashion and accessories, food and beverages, and fitness are the primary interests of his followers.

Kavitha Balan’s content is mainly focused on fashion, beauty, and lifestyle. Kavitha’s audience base above 21 years is 86.03%, with 39.66% followers in the 19-25 age group and 37.43% followers in the 26-32 age group. Her followers are mainly based in Malaysia, India, the United States, and Bangladesh. Her estimated reach is 4.90K and her estimated impressions are 7.34K with an engagement rate of 41.46%. She created about 79% of branded content in collaboration with brands like Jovees Malaysia, H&M, YSL Beauty, Saint Laurent, The Inkey List, L’Oreal Paris, e.l.f Cosmetics and Skincare, Maybelline New York, and other international brands. Her follower rate has peaked since October 2022.

Bila Nadia Lapar is a chef and a food blogger. Her feed is filled with delicious food recipes, mainly focusing on regional varieties in Malaysia. Most of her followers are above 21 years of age, comprising 71.87% of females and 28.13% of male audiences. 88.1% of her followers are from Malaysia, and the remaining are from Australia and Europe. Her estimated reach and impressions are 3.94k and 5.91k, respectively, while her engagement rate is 231.2%, proving she is well-connected with her followers. Bila’s audiences show interest in clothing, fashion, beauty, and vegetarian food.

Verlawn is currently Renographers' Creator Partner for Oppo Malaysia. But he also creates content in the food and fashion niche. A massive portion of Verlawn's audience is 75.17% females. His followers are mainly from Malaysia, with 72.2%, followed by Indonesia, the Philippines, and Thailand. His estimated reach is 3.77K, and his estimated impressions are 5.65K. Verlawn has collaborated with Oppo Malaysia, ShopeePay Malaysia, and Insta360, generating an engagement of 49.33%. The primary interests of his followers are fashion, clothing, and beauty.

Bonnie Bunyau Anak Gustin is a Malaysian powerlifter who has won multiple gold medals for his power-lifting. His Instagram account has over 9k followers and generates the highest engagement rate within the country. His audience comprises about 45.07% females and 54.93% males. His followers are interested in clothing, fashion, food, and sports. His estimated reach and impressions are 1.98k and 2.97k, respectively.


Aliff Alvin works as an ambassador to JZ beauty cosmetics and Impatiens Beauty. His total audience base is 73.03% female and 26.97% male. Most of Aliff’s followers are from Malaysia, Indonesia, Singapore, and South Korea. The estimated reach and impressions are 1.88K and 2.83K, respectively, with an engagement rate of 40.99%.

Maffe Vera is a creative content creator and a talented makeup artist. Her Instagram feed is crowded with splendid makeup posts and reels. Her audience comprises 77.65% females and 22.35% males. Most of her followers are from Colombia, Argentina, and Chile, driving an engagement rate of 54.12%. In the last three months, 69% of her feed had branded, and 31% non-branded content, including promotional content from Rare Beauty, The Ordinary, Miniso Colombia, Docolor, Rude cosmetics, Good Molecules, and many other international brands.

Check out our list to find top-performing influencers in your preferred niche!

Daryll Tan is a Malaysian influencer whose content is mainly based on fashion and lifestyle. He is also a co-founder of @openmindresources and founded a company called Feedforward group. His audience comprises 65.96%  females. His followers are mostly from Malaysia, the United States, Singapore, and the United Kingdom. His estimated reach is 1.04K and his estimated impressions are 1.56K, with an engagement rate of 39.19%. He posted 55% of branded content, promoting brands like Lloyd’s Inn, Kayak Malaysia, Apple, Jo Malone London, Bottoms Lab, Niko&Clare, Pomelo Fashion, Sudio, ALDO shoes, and more.