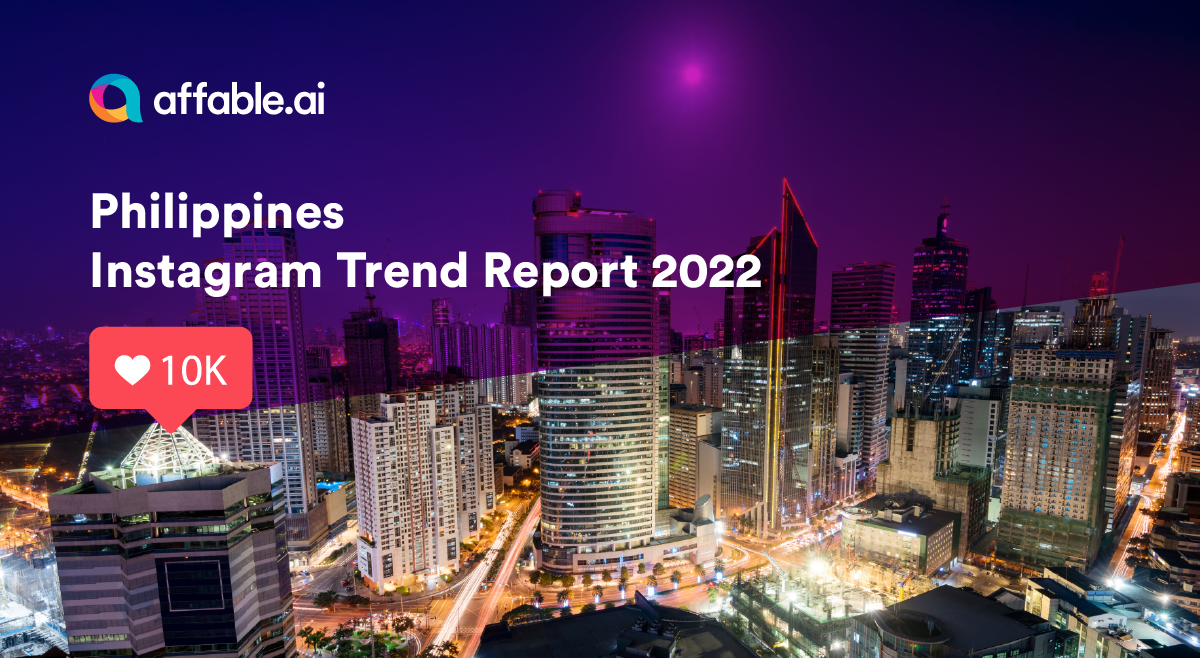 Instagram influencer marketing in the Philippines is nearly at a standstill as there hasn't been much of a change in the number of influencer posts over the last two years. It appears that the platform is quite well-liked by female users, but its popularity is undoubtedly untapped. But brands are able to interact with younger generations thanks to Gen Zers and Millennials, who mainly follow macro and nano-influencers.

We have dissected the data through Instagram profiles and gathered information about influencers. This will help you analyze and plan an influencer marketing strategy to execute effective campaigns and collaborations.

In this report, data was demonstrated by the affable.ai platform to discover different aspects such as audience demographics, the number of influencers under categories with their engagement rates, and a list of the most engaging influencers in the Philippines.

Most Instagram users in the Philippines are females, accounting for 57.18%, and males make up 42.55% of the total user base. Gen Z and Millenials users fluctuate between 38.69% and 33.04%, making them the majority category using Instagram in the country. The age group 33-39 comprises only 11.21% of the total users, followed by the age group 40-46 with just 3.20%. The user rate decreases as age increases.

‍Read our global influencer marketing report to learn how nano influencers will dominate the creator economy in 2023.

Overall, Instagram influencer marketing has driven about 3.33% of the engagement rate in the  country.

Kathleen Espenido produces content based on her lifestyle. Her audience range above 21 years is 63.46%, comprising 30.77% males and females 69.23%. She posted 10% of branded content in the past three months. Kathleen’s followers are mainly located in the Philippines, the United States, and Canada. Her engagement rate is 33.88%, with an estimated reach of 15.43K and estimated impressions of 23.15K.

Zeke Tagorda is a Philippines-based influencer who posts content related to his lifestyle. His followers are mainly from the Philippines, Indonesia, and Thailand, comprising 74.85% males and 25.15% females. Zeke’s estimated reach is 4.68K, with over 33.74% engagement rate. He produced 50% of branded and non-branded content. Zeke promoted brands including Noor Manila, Anakainoo, Emzeption, and The good gang in the past three months.

Maulik Parekh is a wildlife photographer based in the Philippines. His content primarily focuses on wildlife, aerial and travel photography. The majority of his followers are males, comprising 81.34% of the audience base. Prakesh’s followers are mainly from India, the US, Brazil, Mexico, and Italy. He has an engagement rate of over 63.18%. Parekh produced 50% of branded content in the last three months collaborating with brands such as the Photo Society, BBC Earth, Wildlife, Geographic, Animal Planet, and Nat Geo Wild. His estimated reach is around 4.25K and his estimated impressions are 6.38K.

Bianca Mallorca is an artist based in the Philippines. Her content mainly includes lifestyle, art, and skincare. Her audience base is 34.72% females and 65.28% males. Bianca’s followers are dominated by Genz (19-25), with 46.42%. Her recent posts over the last three months have included 10% branded and 90% non-branded content. Bianca’s followers have significantly increased since May 2022. Her estimated reach is 3.96K, and her estimated impressions are 5.93K, with an engagement rate of 44.27%. Bianca’s recently promoted brands include Vitabears, You beauty Global, M concept, Sace lady, Power Support, Watsons Ph, and more.

Deiv Calviz is a freelance illustrator and concept artist. He creates niche content based on art direction,  animation, and lifestyle. His followers comprise 54.97% female and 45.03% male. The follower count has drastically increased since July 2022, with a 51.03% total engagement rate. Calviz attracted followers from the US, Brazil, Indonesia, Argentina, the Philippines, and Turkey. affable.ai demonstrates estimated reach and impressions at 2.57K and 3.85K, respectively. His follower's primary interests are Entertainment, Arts, and Fashion & accessories.

Check out our list to find top-performing influencers in your preferred niche!

Harvey Devanadera is an IFBB Pro MP athlete in the Philippines. He won the 2022 Muscle contest MP championship. His content is highly inspiring and fitness related. His followers comprise 72.22% of males and 27.78% of females. Harvey’s followers are from the Philippines, the US, Malaysia, and Japan. Harvey posted 10% of branded content, collaborating with brands like Dark Horse, Nutrition Depot Philippines, NutraBio Labs, and Athletes Club. His estimated reach and impressions are 2.23K and 3.34K, respectively, with a 34.8% engagement rate.

Wacky’s content is mainly related to his lifestyle. Almost 56.31% of his followers are between 19-25, attracting the younger generation with his content. His follower count has escalated since February 2022 with a 36.18% engagement rate. His followers are mainly from the Philippines, the USA, India, and Canada. His estimated reach and impressions are 2.11K and 3.17K, respectively.

Aira’s content is based on lifestyle, food, and skincare. Her audience comprises females 89.91% and males 10.09%. Her followers' range is dominated by Genz (19-25) with 44.04% and Millennials (26-32) with 39.45%. Aira’s content attracted followers from all parts of the world, mainly from the Philippines, the United States, France, Canada, and Romania. The estimated reach of 1.10K and estimated Impressions of 1.65K  with an astounding engagement rate of 363.27%. Previously Aira collaborated with brands such as You Beauty Philippines, Focallure, Maybelline, Pink Flash Cosmetics, Nine less, and many more.

Joey Albert is pursuing her fourth year in nursing and creates content based on education, study tips, and electronic devices. Her followers primarily show interest in home and garden, followed by food, fashion, and beauty. Her follower base is composed of 80% females and 20% males. The estimated reach is 1.06K, and the estimated impression is 1.60K, with an engagement rate of 87.85%. Joey's followers are primarily based in the Philippines, the United States, Brazil, Thailand, and Indonesia.