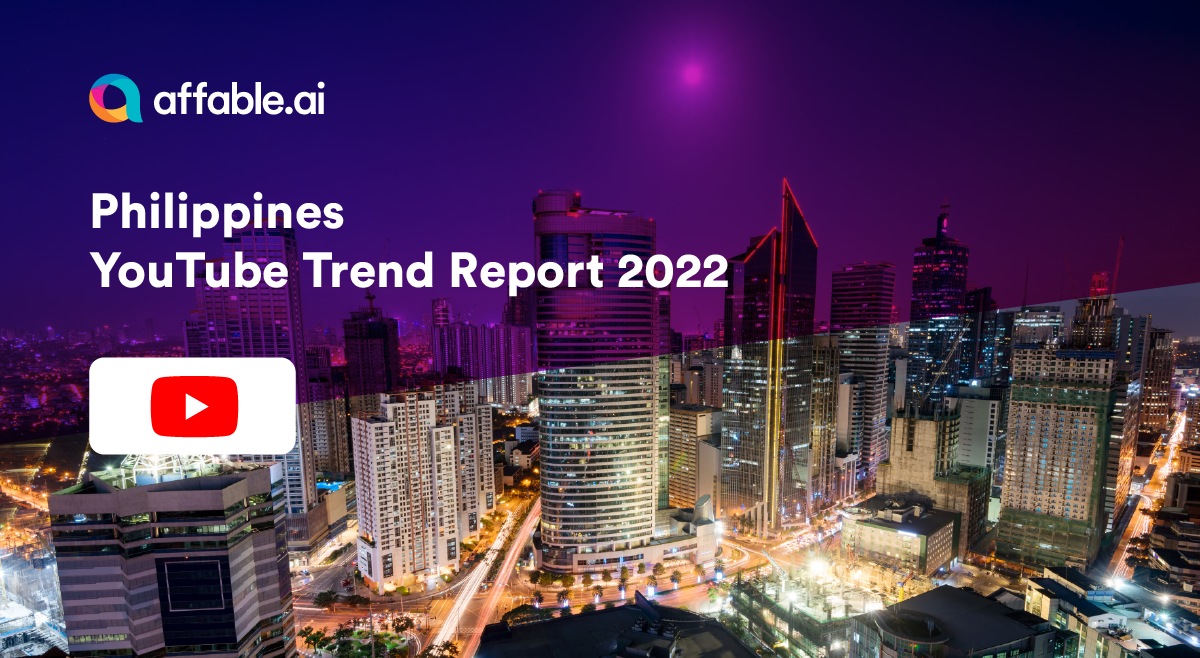 In the Philippines, YouTube is mainly dominated by female audiences, the highest among SEA nations. Even as the video streaming platform saw a decline in the number of posts in 2022, it generated an exceptional engagement rate in all categories of influencers compared to other social media platforms. Especially with a considerable number of micro-influencers and their connection with the target audience, brands can leverage operating in niche markets.

In this YouTube influencer marketing report, affable.ai simplifies different aspects such as the audience demographics, number of influencers, engagement rates, the number of posts in 2021 and 2022, and the list of most engaging influencers on YouTube.

YouTube is a female-dominated platform in the Philippines, comprising over 60.52% of the total audience base.  The millennial audience shares 31.05% of space, whereas GenZ falls under 29.68% of the entire follower base. With over 15.71% of the audience in the 33-39 age group, the video streaming platform allows brands to reach them, unlike TikTok and Instagram, where their proportion is slightly lower.

Micro-influencers, who range between 10k-50k followers, comprise a large segment of the YouTube creator economy,  accounting for 10.29K. On the other hand, the nano influencers stood at  9k in 2022. However, the Philippines can witness growth in nano and micro-influencers as they are a briskly growing influencer category on social media.

‍Discover top-performing content creators in your region through our Influencer Ranking page. ‍

YouTube generated exceptionally high engagement rates among all the categories of influencers, implying that the potential reach for brands is much higher. Celebrity influencers with above 1M+ followers generated the highest engagement on YouTube with  602023.26% average views due to the content virality.

Micro and nano influencers generated 65478.09% and 26345.64% engagement rates by sharing close rapport with their followers. Further,  mid-tier and macro influencers have developed a considerate amount of engagement rate, proving strong affinity and connection between the followers and users.

The figures show that YouTube can be the ideal platform for brands and marketers who want to reach wider audiences and benefit from brand awareness.  Unlike Instagram and TikTok, Youtube’s engagement rate increases as the number of followers increases.

The number of influencers' posts decreased by 18.65% in 2022 compared to 2021. Overall, influencers produced 44.5M posts in 2021 which reduced to 36.2M in 2022. Despite the decline, YouTube influencer marketing continues to expand through its strategy by sharing YouTube Shorts alongside long-form videos.

The Panty Droppaz is a worldwide league of Filipino producers and artists. The record label focused on modern,  futuristic hip-hop and rhythm & blues, captivating GenZ, comprising 89.87% of their audience base. One of Panty Droppaz’s artists and Filipino rappers, Skusta Clee, released his new music video on their YouTube channel, earning #1 on trending credit in the Philippines. Their songs are catchy and alluring, bringing them over a 7.32% of engagement rate and 27.03M average views per video. The Panty Droppaz estimated impressions are 597.00K.

Alex Gonzaga is a Filipino media personality, comedian, businesswoman, host, singer, and actress. Her self-titled YouTube channel is one of the most subscribed channels in the Philippines. She is featured as the lead artist in many music videos, and her multi-talented personality bought her colossal fame and subscribers, primarily comprising GenZ, and Millenials. Her YouTube videos focus mainly on her lifestyle, fashion and situational comedy, generating over 1.24% of the total engagement rate. Her estimated reach and impressions are 3.70M and 3.93M, respectively.

Ivana Alawi is a Filipino actress, model and YouTuber. She is also the CEO of her skincare brand called Ivana Skin. Alwani is one of the biggest social media influencers of her time and the most subscribed Filipino celebrity on YouTube. She has been honored by Google as the “Top YouTube Content Creator” in the Philippines for two consecutive years. Her fandom bought her followers from all generational audiences, primarily Millennials and GenZ, bringing her 4.86M estimated impressions.  Her YouTube content is mostly about situational comedy, lifestyle, and vlogging, generating over 1.24% of the engagement rate and an estimated reach of 3.70M.

John Neil Torrente Roa is a Filipino singer whose fame rose after joining the fourth season of Philippians Got Talent by reaching the show's quarterfinals. He was previously a member of the hip-hop collective Ex Battalion. His first single as a solo artist, “Di Ako Fuckboy”, featuring indie band Agsunta, is one of the most viewed acoustic hip-hop songs on YouTube. John’s hard-hitting and contemporary music bought him followers worldwide, where GenZ and Millenials are the primary audience base. His YouTube feed is crowded with his music generating over 3.55% of the total engagement rate. His estimated reach and impressions are  3.51M and 250.50K, respectively.

Ex Battalion is a Filipino hip-hop collective group mainly known for their hit singles “Hayaan Mo Sila” in 2017 and “No Games” in 2016. The group comprises seven rappers and vocalists who established Filipinos’ appreciation for homegrown hip-hop in just a few years. Their harmonious journey captivated 95.65% of GenZ and Millenial followers. With balanced verses and pop music, Ex Battalion music continued to rejuvenate listeners with every song, generating 1.38% total engagement per video. Their estimated reach and impressions are 9.23M and 1.52M, respectively.

Rain Allen Olagure is an artist and animator creating an ongoing saga of Minecraft original music videos. He also produces a series of Minecraft short films attracting 56.37% of millennials and 30.91% of GenZ followers. His way of crafting characters, design, and storylines generated 9.20M average views per video. Rain’s estimated impressions are 612K, according to affable.ai’s data. Rainimator’s total engagement rate is 6.29%.

The YouTube channel GMRY, run by Kristine Pasan, creates anime-themed lyrics videos, attracting massive amounts of GenZ and Millennials subscribers, accounting for 94.03%. Gaming and anime being the most popular verticals on YouTube, her videos generated 139.37% of total engagement and are estimated to reach 9.94M per video. Kristine’s estimated impressions are 19.11K.

Robie creates animation videos for Filipino/ Tagalog and traditional folk songs, providing knowledge for all generations. His creative ways of narrating cultural stories and country music attracted all generational audiences from GenX to GenZ with a 0.97% total engagement rate. His followers are primarily females accounting for 69.61% of the audience. Rodie’s traditional and interactive storytelling style generated 3.98M average views per video and 251.10K estimated impressions.

Toca Rienne channel produces videos based on an animated cartoon, the Toca Boca game. A few of the channel's short videos based on gaming went viral, bringing them 41.11% of the total engagement rate. Animation being the most popular vertical, this YouTube channel generated over 2.50M estimated reach and 137.10K estimated impressions. The content created by Toca Rienne captured all generational audiences, primarily GenZ and Millennials.

Aireez's content is mainly based on TikTok mashup songs and vlogging. GenZ and Millennials occupy most of her follower base by relating to her picks on trending songs. Her content attracted over 74.39% of females and 25.61% of males. Aireez's mashups brought over 83.35% of the total engagement rate. Her estimated reach is 3.83M, and her estimated impressions are 11.67K.