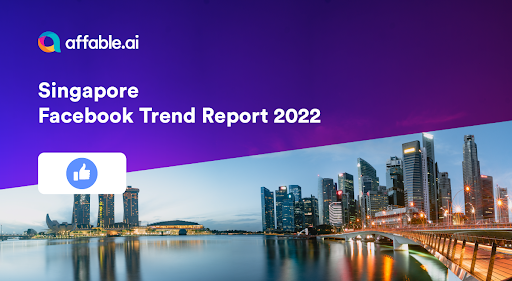 Considering the immense popularity of TikTok and Instagram in Singapore, the chances of Facebook being the go-to platform for influencer marketing are comparatively low. Facebook generated less than a 1% engagement rate in all categories of influencers compared to other social media platforms in the country. However, with a considerable number of active users and micro-influencers, brands can still use the platform to enhance their influencer marketing strategies.

In this report, data is exhibited by affable.ai to discover different metrics such as audience demographics, the number of influencers under categories with their engagement rates, and a list of the most engaging influencers in Singapore.

The Facebook audience in Singapore primarily comprises females accounting for 53.88% of the total audience base, and male users stand at 46.14%.  Millennials (26-39) are the most active user base, winning over 48.02% of space; the platform can be ideal for brands whose target audiences are Millennials. On the other hand, Gen Z (18-25) occupy 30.34%, showing that they are less concerned about Facebook compared to millennials.

‍Discover top-performing content creators in your region through our Influencer Ranking page. ‍

In 2022, Facebook influencers' posts decreased by 39.50%. However, in 2021 the creators posted 303.6K posts, and the number swiped to 183.6K in 2022. The decline in posts shows that Facebook needs to make additional efforts to sustain itself in the era of TikTok and Instagram.

Wilson Heng is a success strategist who has helped many with his skills and knowledge in Metaphysics. He also runs a website that offers training courses such as Feng shui (Chinese Geomancy), prediction, body wellness, and more. Wilson's content is mainly based on metaphysics and lifestyle, bringing over a 15.04% engagement rate. Based on the quality of the content, his audience drastically increased from March last year, mainly from the Philippines, Indonesia, and Singapore. His estimated reach and impressions are 3.20K and 4.80K, respectively.

Evan is a content creator and an artist. His feed is crowded with the ukulele and collaborated videos with other singers. Evan also plays the electric guitar and writes songs, and his talent got him followers mainly from the US, Singapore, and Malaysia. The estimated reach and impressions are 3.0K and 4.50K, respectively.  Surprisingly, 25.9% of his followers are above age 46, and 15.06% are from the 40-46 age group. Genz and Millennials comprise 35.61% of total followers. Evan produces engaging content with his music attracting all age groups with over a 17.07% engagement rate per post.

Bjork Chen works as DJ at Singapore Love 972 radio station. She produces niche content focusing only on the '70s, '80s, and '90s pop culture, actors, and primarily classic songs. Chen's female audience admires her posts broadly, comprising about 62.26% of total followers. She attracted GenX (3173%) and Millennials (21.15%) and illuminated the beauty of pop culture to GenX, who accounts for 44.12% of her follower base. Chen's estimated reach is 1.28K, with 14.15% of total engagement per post. One interesting fact about Chen is that she not only lists the songs from the 70s and 80s, she tells the story behind them, making her feed more captivating. It helped her create 1.92K estimated impressions, according to affable.ai statistics.

Nancy Ho is a renowned life strategist, state-of-mind specialist, and the author of the book Love Reignited. She guides people with personal well-being, hypnotherapy, and relationship solutions. Nancy's feed is mainly composed of reels about mindset, passion, and relationships, accounting for a 13.83% total engagement rate. Her content reached all generational audiences, from GenZ to GenX. Ho's expertise in her domain brought followers from all over the world, primarily from the Philippines, Indonesia, and Malaysia. Her posts developed an estimated reach of 1.14K and estimated impressions of 1.72K.

Chiou Huey works as an artist at King Kong Media Productions. Her content is primarily based on acting, hosting, and lifestyle. In addition, Huey posts hilarious and situational reels, which bought her 11.92% of total engagements per post. She also creates fashion-related content, mostly winning GenZ (37.42%) and Millennial (38.65%) followers from Singapore, Malaysia and Laos. According to affable.ai data, her content generated an estimated rate of 2.60K and estimated impressions of 3.90K.

Annette Lee is a singer-songwriter, scriptwriter, and YouTube personality. She is well-known for her shows like Glowing Up, Graduation, and her short video series on social media. Annette’s fandom bought her followers all over the globe, especially from Singapore, Malaysia, and Hong Kong. She posts content based on her career updates and lifestyle, accounting for 9.94% of the total engagement rate. She attracted GenZ and Millennials who were driven to her account through her films. Annette collaborated with other brands like AsiaOne, Singapore Chinese Cultural Centre, and more. Her estimated reach and impressions are 19.00K and 28.05K, respectively.

John Kim is an investor and content creator who produces vlog content about startups, faith, and climate. With eco-conscious videos, he gained popularity among GenZ and Millennials, comprising 76.03% of his follower base. John raises awareness about climate change and the environment by vlogging about them, starring his son in the videos. His educational videos generated 5.72% of the total engagement rate. His estimated reach and impressions are 8.84K and 13.27K, respectively.

Justin Acreden, also known by her pseudonym PXSHBXL, is an architect and interior designer. She also enjoys creating sketches as a way to seek a connection with herself. Her rustic art style bought her connections around the globe, mainly from the Philippines, South Korea, Japan, and Italy. Justin’s engagement rate accounts for 9.01% per post with an estimated reach of 2.80K and estimated impressions of 4.20K. She usually illustrates the complexity of human dramas in a visual narrative. Her concept of art attracted a massive number of GenZ, comprising 94.15% of her follower base.

Angie Lau is a multi-talented singer, performing artist, celebrity judge and singing instructor. She hosts various television shows in the country, and her popularity gained her followers mainly from Singapore, Malaysia, and Taiwan. Angie’s feed is about her career updates and lifestyle, bringing an engagement rate of 8.05% per post. Her audience base is dominated by female followers, accounting for 66.67%. Her estimated reach is 1.82K, and her estimated impressions are 2.70K, according to affable.ai data.

Chantalle Ng is a Singaporean actress who starred in many television series and films. She won Star Awards for Best Newcomer and Best supporting actress. Her huge fandom bought her followers from Singapore, Malaysia and Myanmar to admire her talent. Chantalle’s feed is about her lifestyle and fashion, generating 7.77% of the total engagement rate. GenZ and Millieanls are primary followers comprising 52.74% and 40.93%, respectively. Her estimated reach is 8.06K, and her estimated impressions are 12.90K.