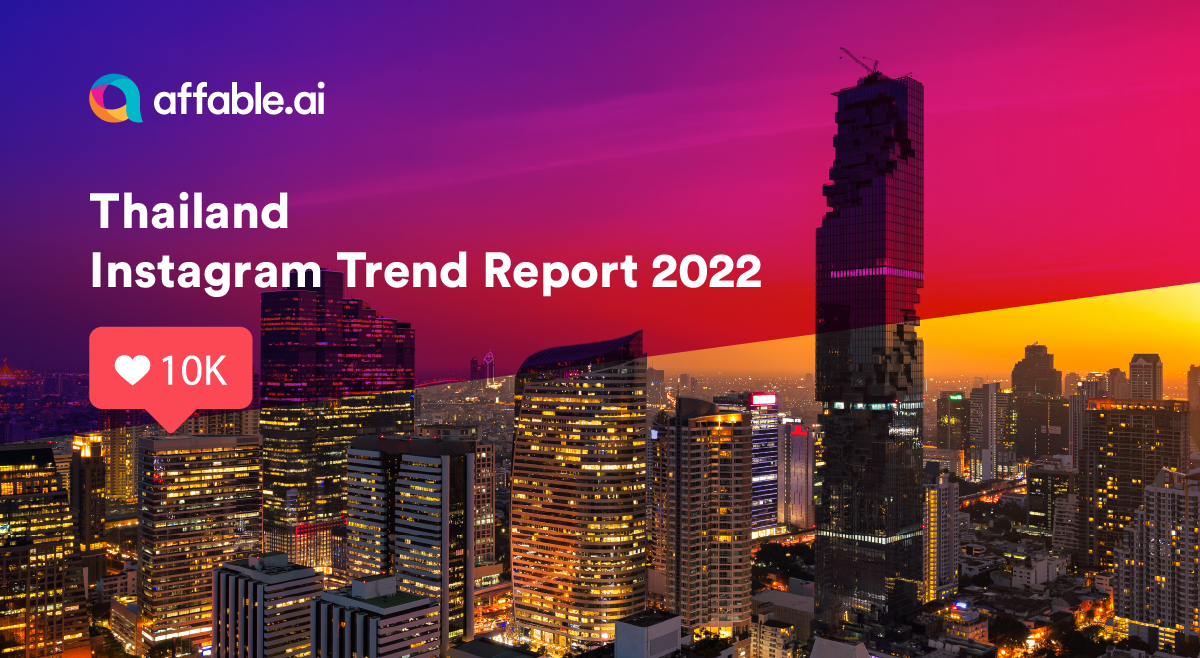 Influencer marketing is a growing industry in Thailand, with all influencer categories driving equally high engagement rates. In 2022, Thailand’s creator economy generated over 3.6% engagement in the country. There’s a massive potential for brands to engage audiences in multiple demographics.

affable.ai’s data demonstrates that creator marketing in Thailand will continue to rise, regardless of the declining number of influencer posts on Instagram.

This Thailand regional report gives a detailed account of the most influential creators in the country, their engagement rates and audience demographics, and the total number of posts published by them in 2022.

Gen Zers aged between 19 and 25 years are the most active audience on Instagram in Thailand, accounting for more than 45% of the user base, highest among other APAC countries. Compared to them, only 29.25% of Millennials (aged 19-25 years) use Instagram in the region. Out of them, there are 55.20% females, and 44.49% males, showing that Instagram is a female-dominated platform in Thailand.

The nano and micro-influencers clocked the highest engagement rate, 3.67% and 3.05%, respectively. Although there was a significant difference in the number of micro and nano influencers, both categories generated a similar engagement rate in 2022, indicating that these are the most engaging influencers in the country.

Interestingly, Thailand celebrities have a higher engagement rate compared to other APAC nations. Despite being low in number, the celebrity influencers generated an engagement rate of 2.67%, suggesting that they are an influential voice in Thailand and people follow their content.

‍Read our 2023 influencer marketing predictions report to understand what 2023 will look like for the three social media giants.

Sahawat K. is a Thailand-based influencer creating content in the travel, lifestyle, and entertainment niche. His Instagram profile displays content from his life in the country, engaging a large portion of a female audience. Around 81% of his audience is above the age of 21, mainly comprising Gen Zers. Sahawat usually posts non-branded content that generates a total engagement rate of 36.4%. LG, and Cetaphil, are the Thailand businesses that have collaborated with him in the past couple of years.

With more than 28k followers, Sumlee F. is one of Instagram's most engaging food influencers. Her profile is dedicated to delicious food recipes and images of perfectly cooked cuisines. A good portion of her audience is from Thailand and, interestingly, the US, Indonesia, France, South Korea, and the rest of the world. She brings in more than a 36% engagement rate, higher than the 5% rate created by similar influencers. In the last three months, she published 37% branded content out of 40 posts. She is approached by brands like INKA BKK, Flowers & Bakeries, OhKajhu Organic Farms, Pandora, Mama.cafe, Kelyn Studio, and more.

Kara is a well-known beauty influencer in Thailand who engages a significant percentage of female followers. She creates a ton of content, including branded promotions from brands like SheaBrand, LIVE Tinted, Rose Inc, Bobbi Brown Cosmetics, Hero Cosmetics, Dior Beauty, Merit Beauty, and a lot more. Despite residing in Thailand, Kara has a large number of followers from the US, making up 52% of her followers. According to affable.ai's analysis, her content generates an engagement rate of 38.29%.

Ree creates content in the food and beverage industry generating a high engagement of nearly 43%. Her page is filled with healthy vegan recipes for daily and holiday cravings. In addition to that, she creates authentic branded content for brands like Molly Ally Ice cream co., Samyangfoods, Ireen Bakery, Coffee Beans By Dao, and so on. Ree interacts with almost 83% of female followers, of whom 45% are aged 19-25 years.

‍Learn how pet influencers can help generate positive engagement for your brand.