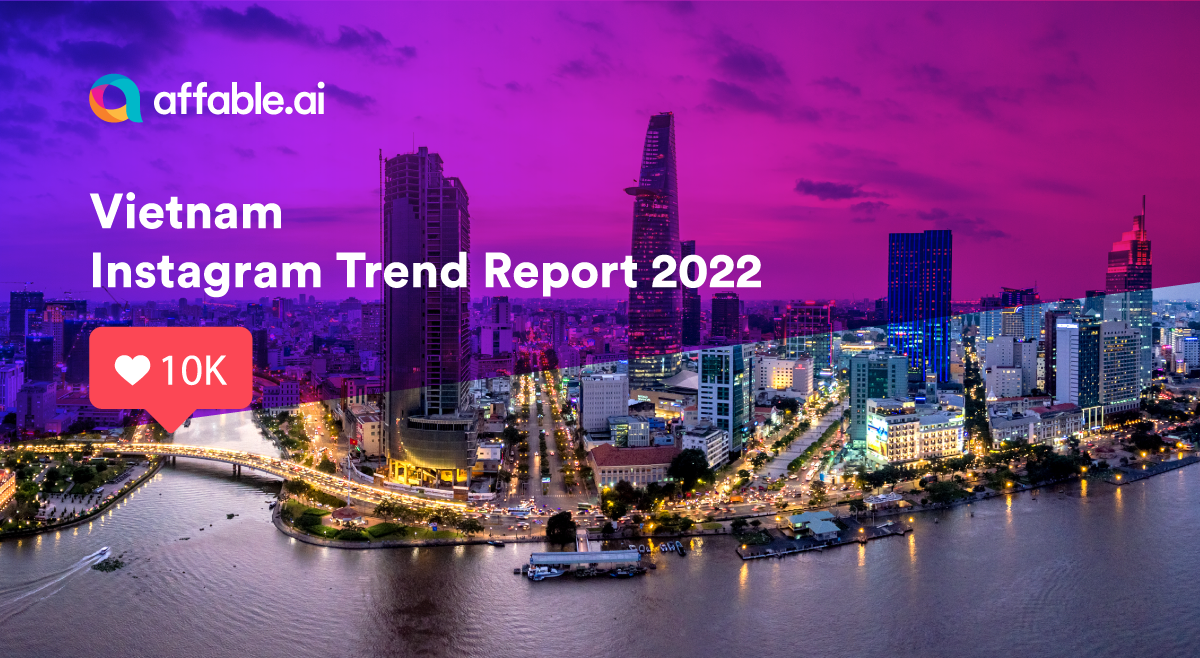 A highly engaged influencer’s account can be a dreamy place for brands to reach Vietnamese consumers on social media. The key is to choose the right influencers who can propel valuable outcomes for the brand. Micro-influencers work best to increase conversions, while macro and celebrity influencers are great to generate brand awareness.

This report will take you through the data, examining audience demographics, the number of influencers, engagement rates, and a forged list of the most engaging influencers in Vietnam.

A majority of Instagram users in Malaysia are females, accounting for 60.11% of the audience. Out of every 100 users, 60 are female and male users make up only 39.61% of the user base. Among them, Gen Zs aged 19-25 years use the platform frequently, followed by Millennials aged 26-32 years who comprise 26.25% of the audience base. The data states that Instagram is primarily used by the younger generation in Vietnam.

Nano influencers' and Micro influencers' engagement rates fluctuate between 3.63% and 3.08%. Unlike other categories of influencers, nano and micro-influencers share harmony with their followers. In the case of mid-tier (50k-100k) and macro influencers (100k-250k), the rate ranges between 2.33 and 2.25%.

‍Read our global influencer marketing report to learn how nano influencers will dominate the creator economy in 2023.

Overall, Instagram influencer marketing dragged about a 3.75% engagement rate in the country.

Nguyen Huru Thong is a Rubik's cube player. His content is mainly based on his lifestyle and his achievements. According to affable.ai’s data, his account has an estimated reach of 2.76K and estimated impressions of 4.14K with the highest engagement rate of 273.54%. Most of his followers are from Vietnam, India, the United States, Brazil, and Italy. His audience above 21 years is around 57.6%, comprising 73.73% females and 26.27% males. Fashion, beauty, and clothing are the primary interests of his audience.

Yixuan is a content creator based in Vietnam. His content is mainly based on fashion, lifestyle, and beauty. His audience above 21 years is around 57.43%, comprising 74.32% females and 25.68% males who are from Thailand, Malaysia, China, Taiwan, and Indonesia. His estimated reach is 10.96K and estimated impressions are 16.45K with a 44.52% engagement rate.

Nguyen Thuy is a Vietnam-based content creator who posts content primarily on beauty and fashion. Her audience base above 21 years is about 54.39% comprising females 65.16% and males 34.84% who are mainly from Vietnam, Indonesia, Thailand, Malaysia, and India. Affable demonstrated that her estimated reach is 7.06K and estimated impressions are 10.59K with a 36.4% engagement rate. Her follower's primary interests are fashion, clothing, and food.

with a 21.23% engagement rate. Beauty, food, fashion, and cuisine are popular vertices among Pham’s followers.

Xinhdep is a Vietnam-based influencer whose content is mainly focused on beauty, fashion, and lifestyle. She also has another Instagram profile, @tips_phoido__ to provide fashion tips for her followers. Her audience base above 21 years is 65.19% comprising 54.43% females and 45.57% males who are primarily from Thailand, Indonesia, South Korea, Japan, and Vietnam. Her estimated reach is 3.51K, estimated impressions are 5.27K, and engagement rate is 21.02%.

Vyphie’s content is mainly based on lifestyle, fashion, and food. Her audience age above 21 years is around 54.55%, comprising 88.64% females and 11.36% males from Vietnam, the United States, India, and Canada. She posted 6% of branded content collaborating with brands like Dico and Das la vie. Vyphie’s estimated reach is 2.65K and estimated impressions are 3.98K with a 48.6% engagement rate. Fashion, beauty, and clothing are followers' primary interests.

Pham’s content is mainly based on fashion and travel whose followers are mainly from Vietnam, South Korea, the United Kingdom, and the United States.  His audience base above 21 years is about 71.89% comprising females 89.16% and males 10.84%. He posted 25% of branded content. Affable demonstrated that her estimated reach is 1.08K and estimated impressions are 1.61K.